“Three, two, one and…action!” The new movie Simmy the Kid is in full production. The directors and actors try their upmost to turn the western movie into a success, but they can’t do that without the new The Sims 3 Movie Stuffpack. “Create the right vibe/atmosphere with accessories inspired by horror, western and superhero movies.” says the cover of the ninth stuff pack. Will these accessories help the directors to win an award, or will the movie turn out to be a mayor disaster. 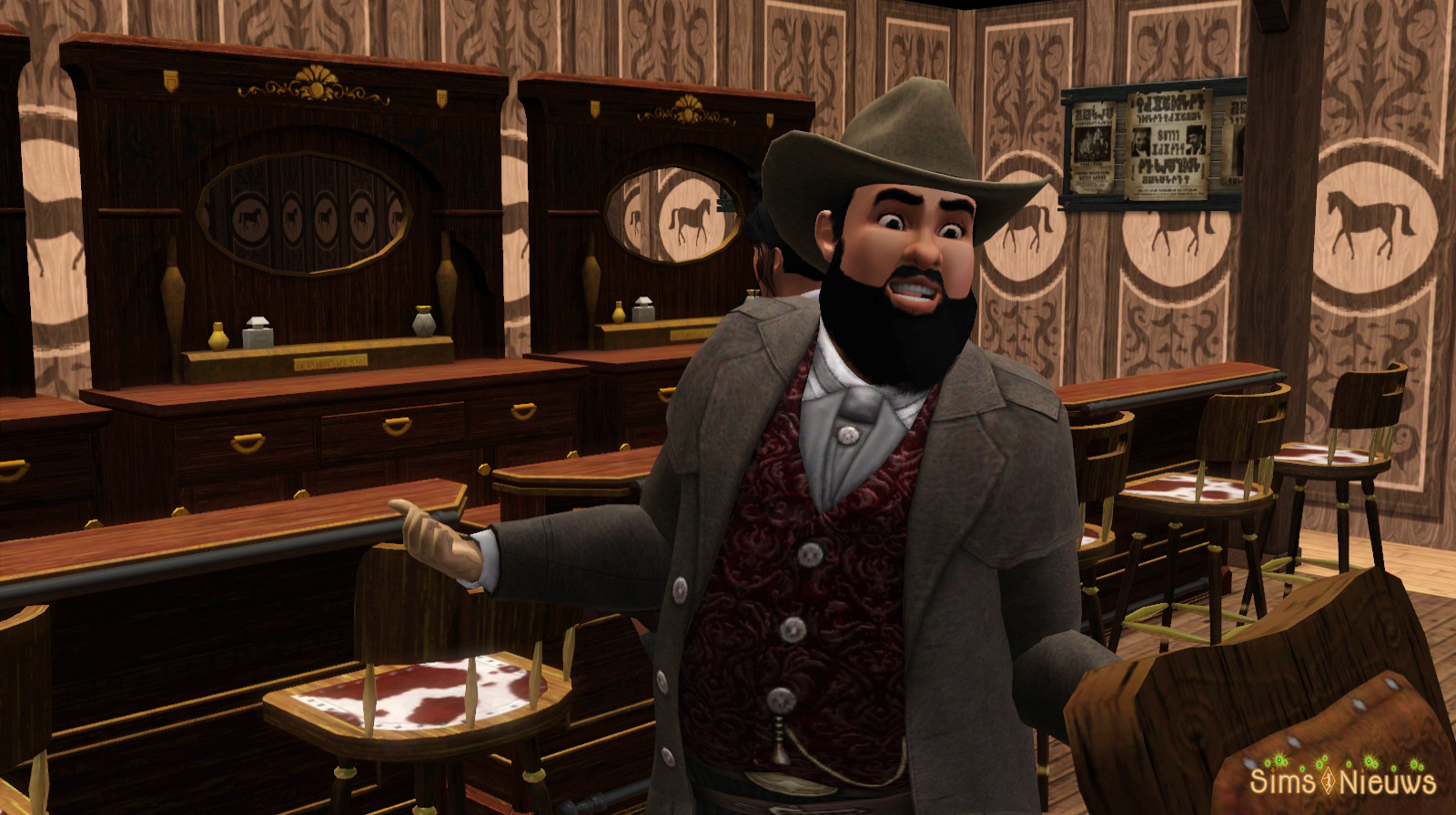 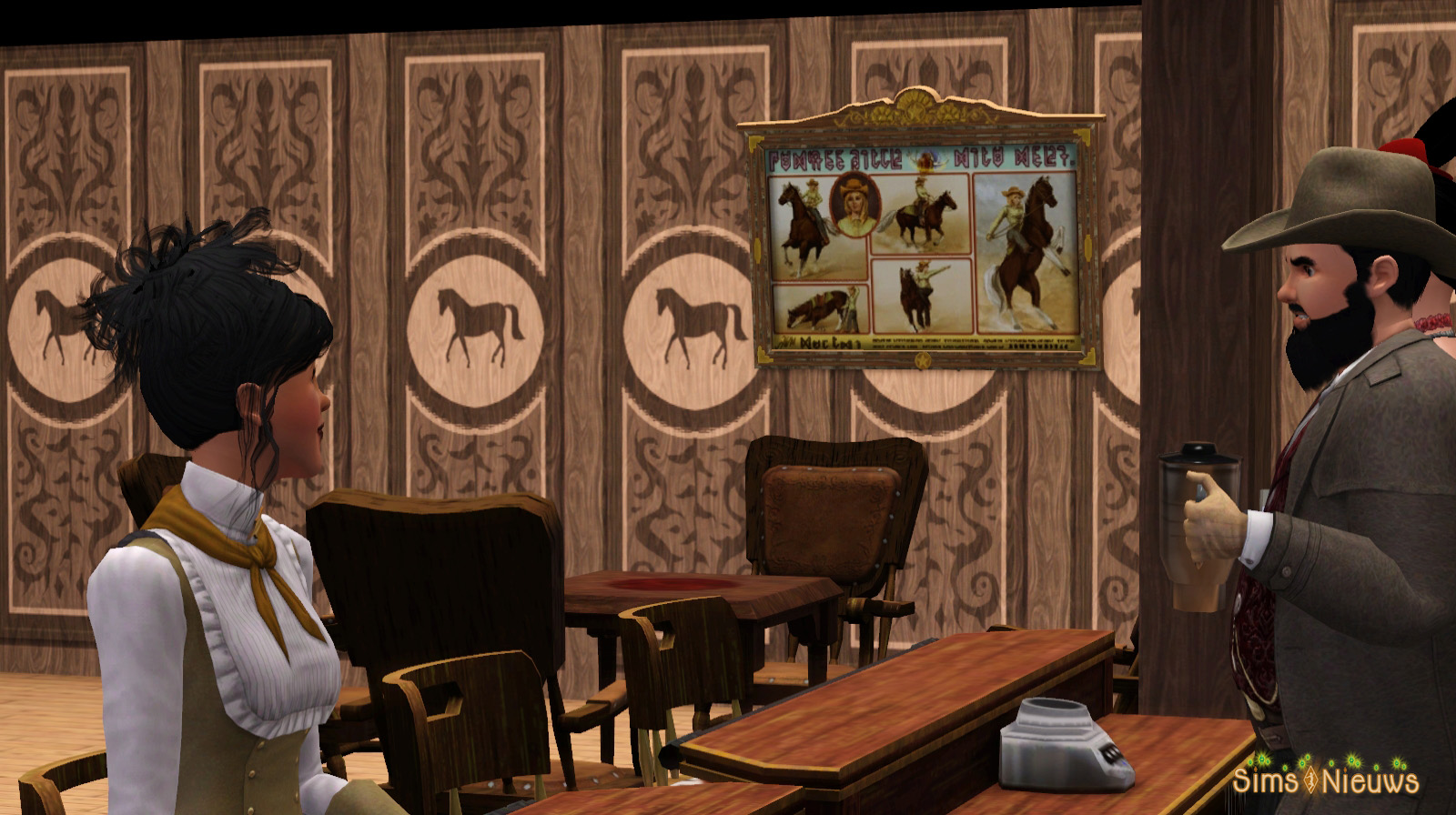 The pack is based on three movie themes of which western style is one of. The theme has eleven items. People in the wild west didn’t use sanitary like we have in our homes. Still, Sims have to empty their bladder every once in a while. The Sims team has found a nice solution: The all in one-bathroom for the outdoors! This is a small cabin that can be put somewhere on the prairie, to keep the smell outside. 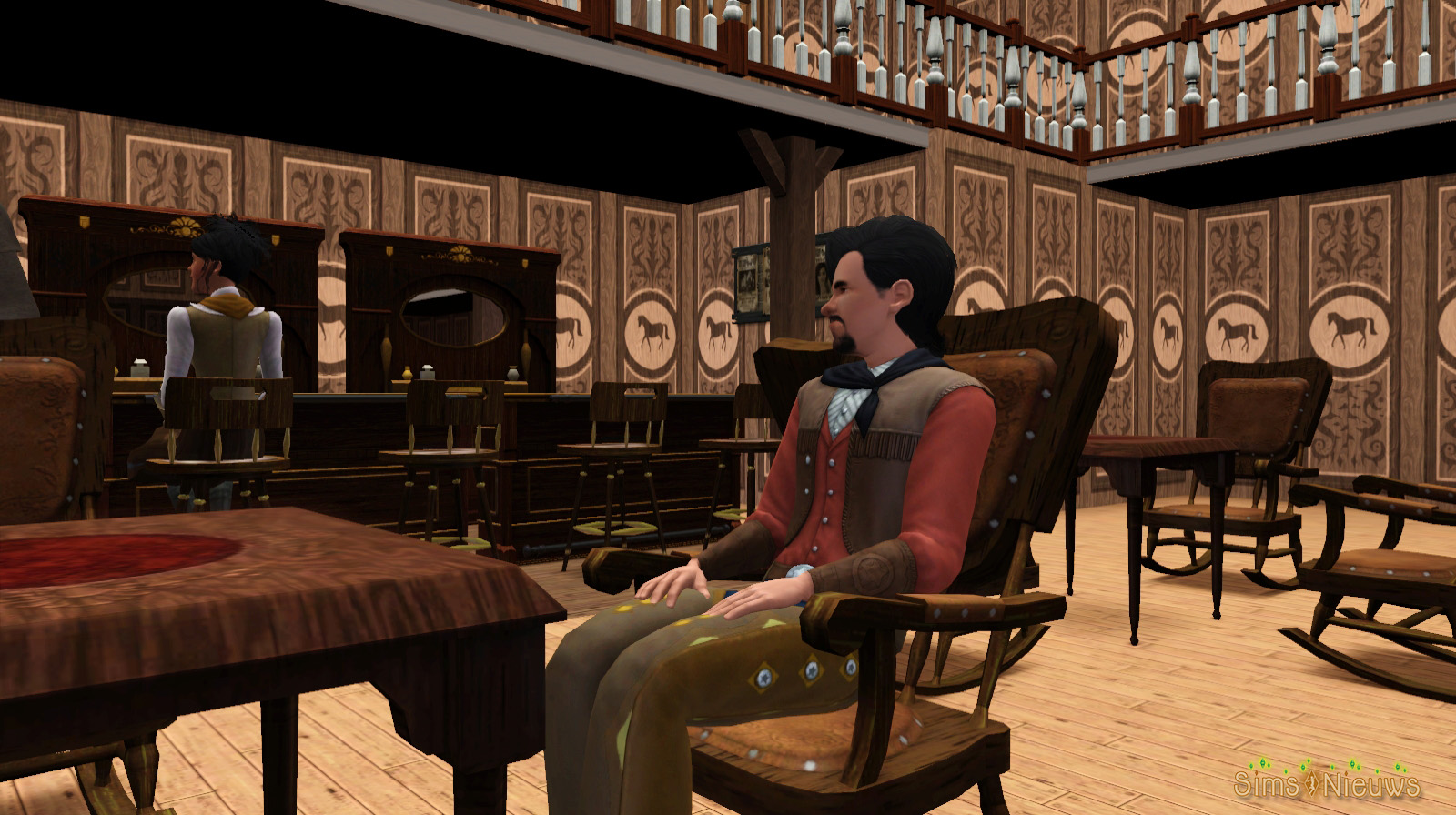 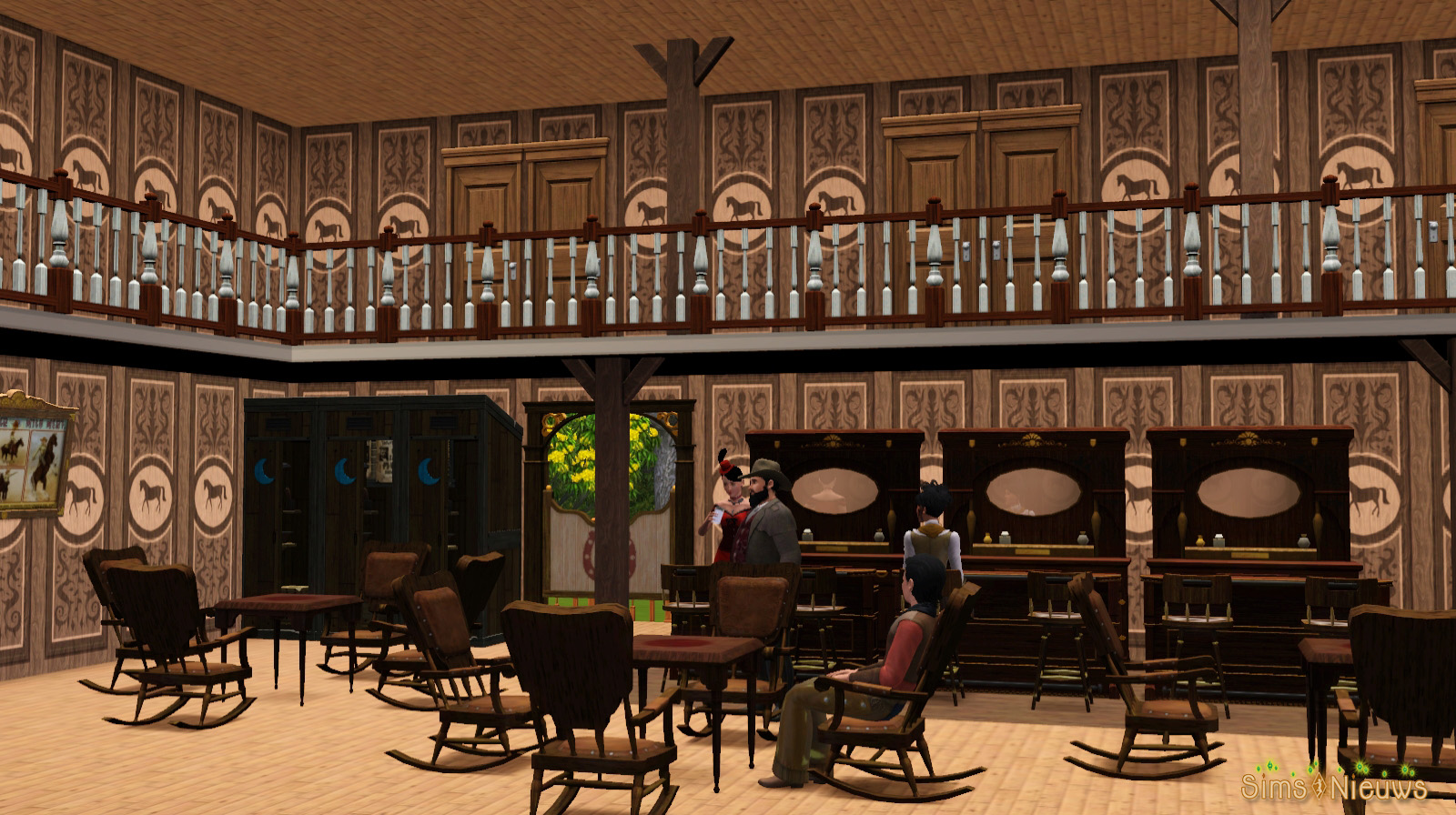 Enter the saloon through the ‘Horseshoe’ Saloon door. A real cowboy kicks the door right in. This swing door makes sure your Sim leaves a good impression on the saloon guests. Furthermore, the western theme offers a bar, a rocking chair, a dining table and a dresser. The theme only has three items for decorating of which all three are paintings.

In Create-a-Sim players can create a real cowboy or cowgirl. For men there are two outfits and one haircut. The men can also have their moustache cut in a new fashion. The women have four new outfits and five new hairstyles. One women’s outfit is inspired by Annie Oakley. Annie Oakley was a sharpshooter in the nineteenth century. 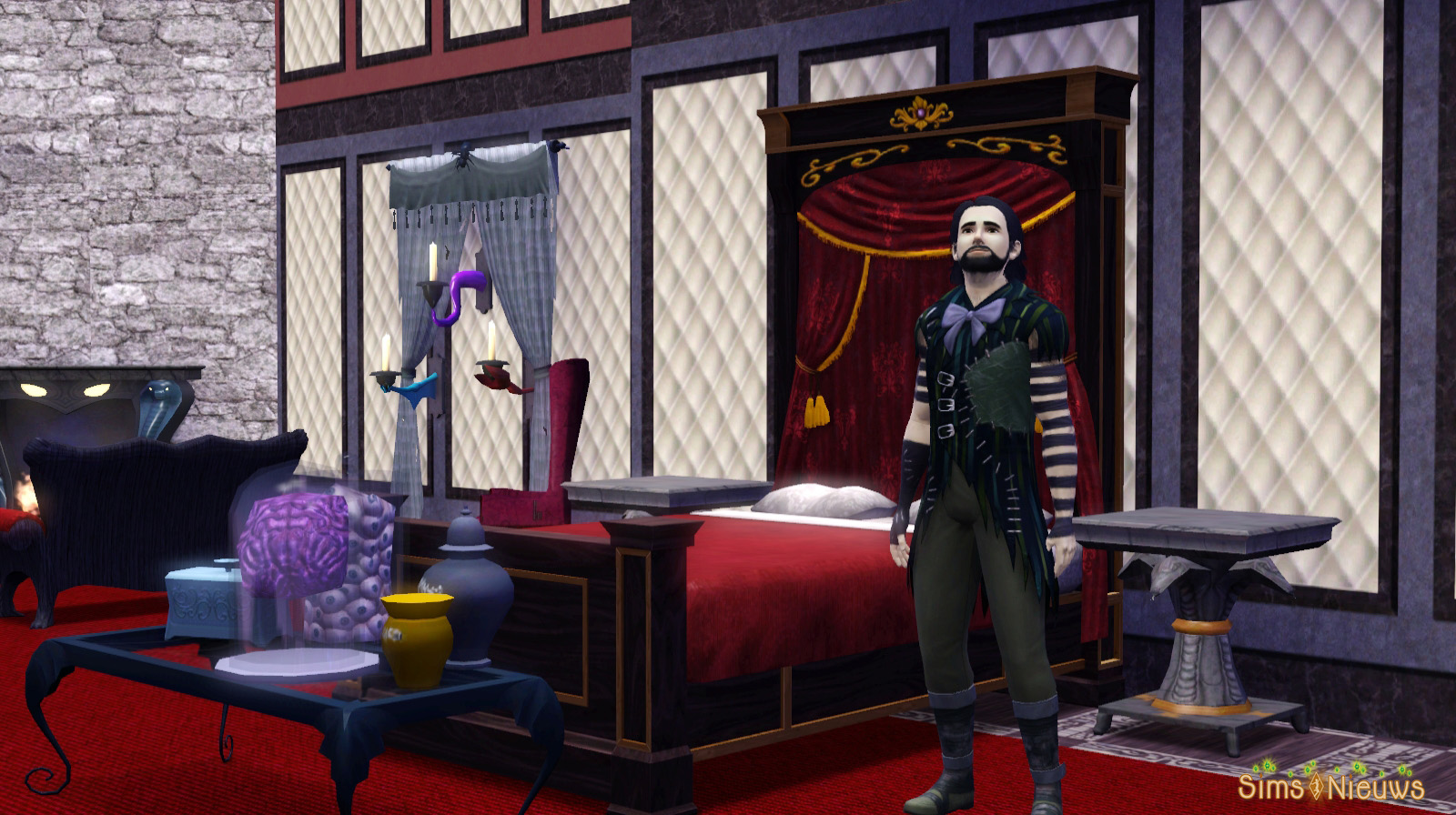 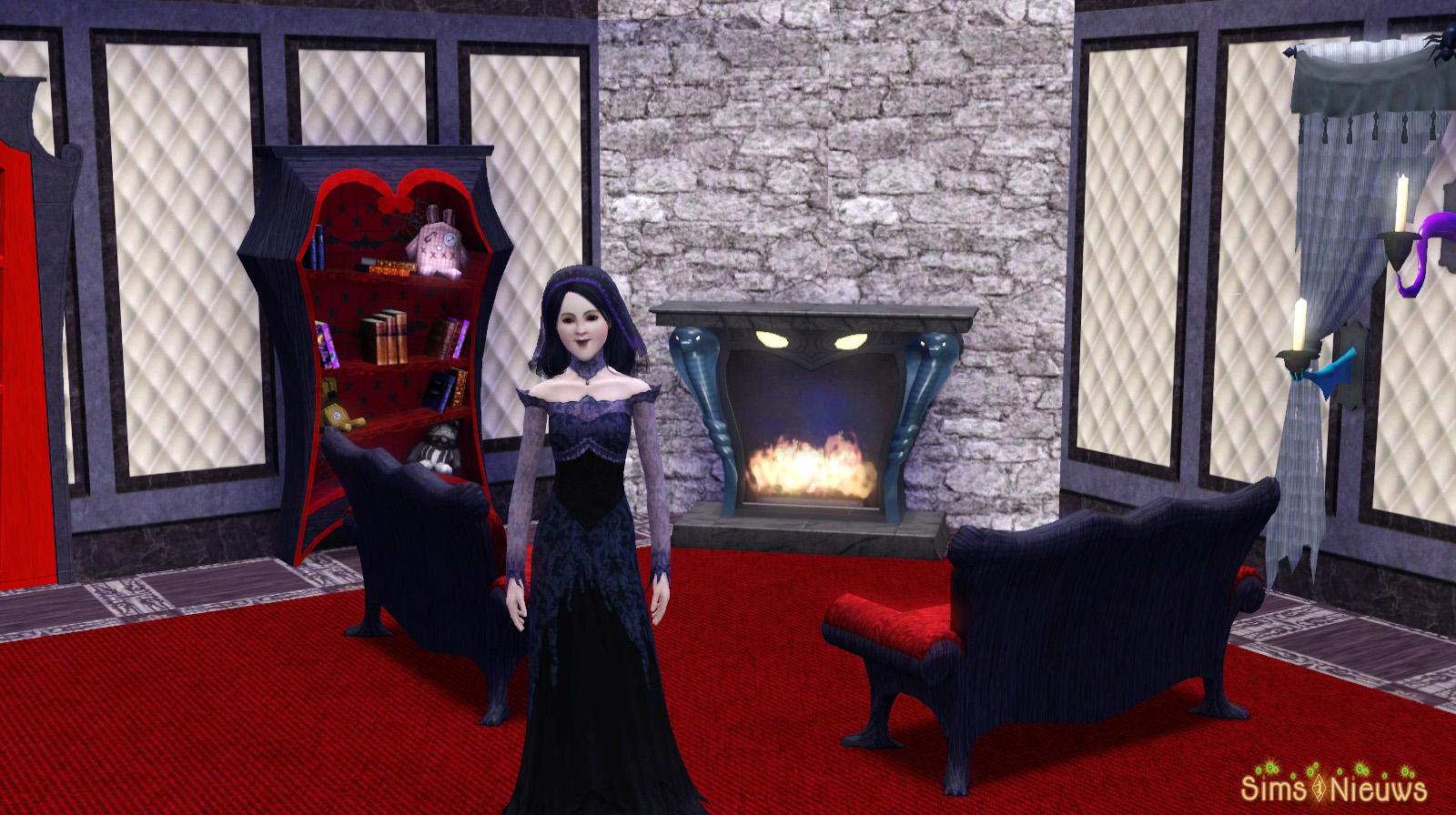 The second theme included with The Sims 3 Movie Stuff is Horror. Gory scenes, a world full of zombies and getting scared about a freakishly thrilling movie scene. This theme contains twelve items. These twelve items are divided into the categories decoration and utensils. The utensils category contains ten items including a huge bed, the ‘Open View ’fireplace – decorated with cat eyes and cobra snakes – and some tables and seats. The other two items are decorative items. It is a torn curtain and a combination of brains and eyes in a bottle.

Men can dress up in two new outfits. One of these outfits is inspired by Rocky Horror. It’s a comic horror movie in which Rocky Horror is the main character. The movie released in 1975. The main character the movie doesn’t wear a lot of clothes and the clothes are rather embarrassing. For women there are four new outfits. Most of them are dresses. There are also three new hairstyles for women. That’s all the stuff the Horror Theme contains. 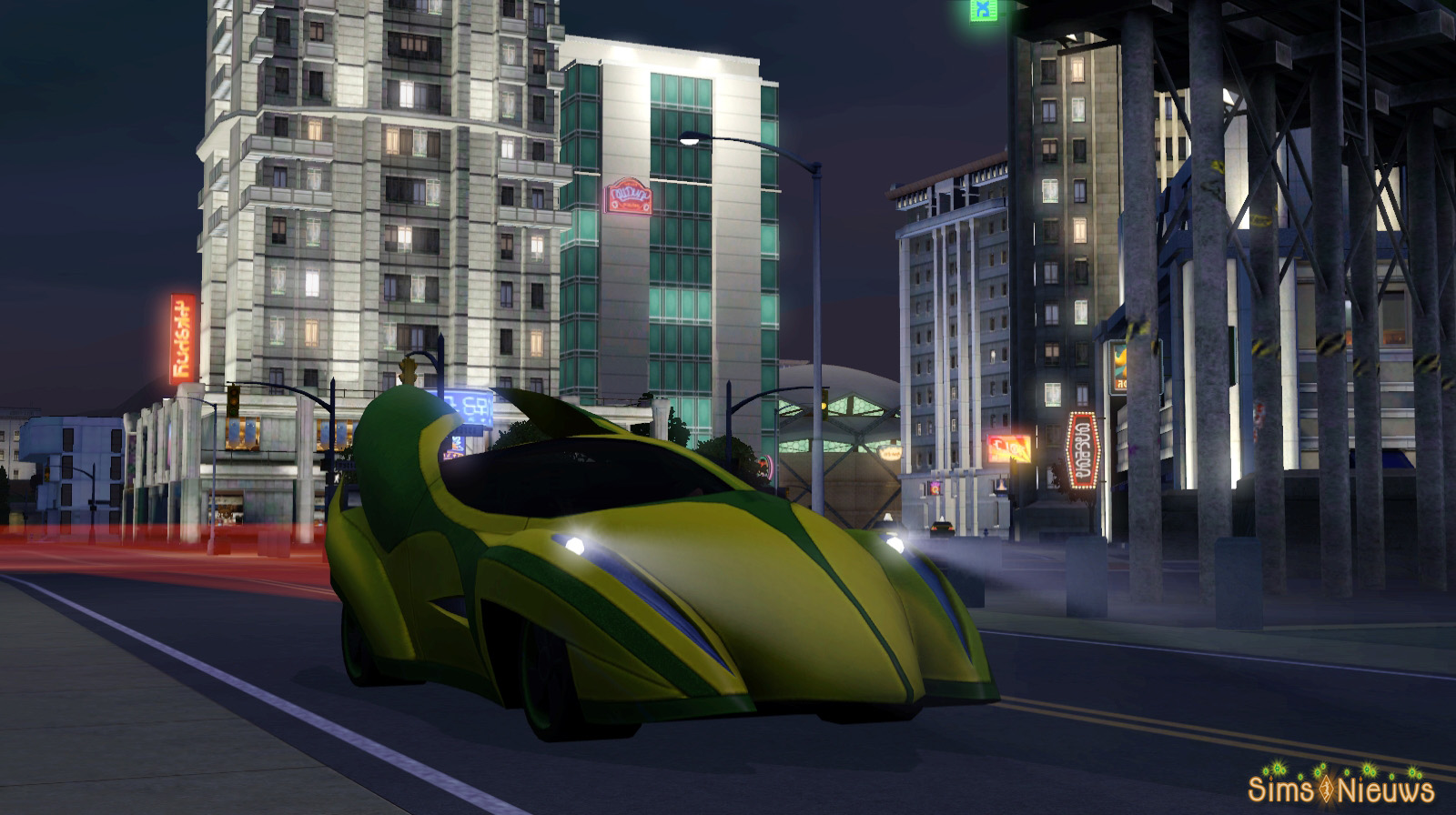 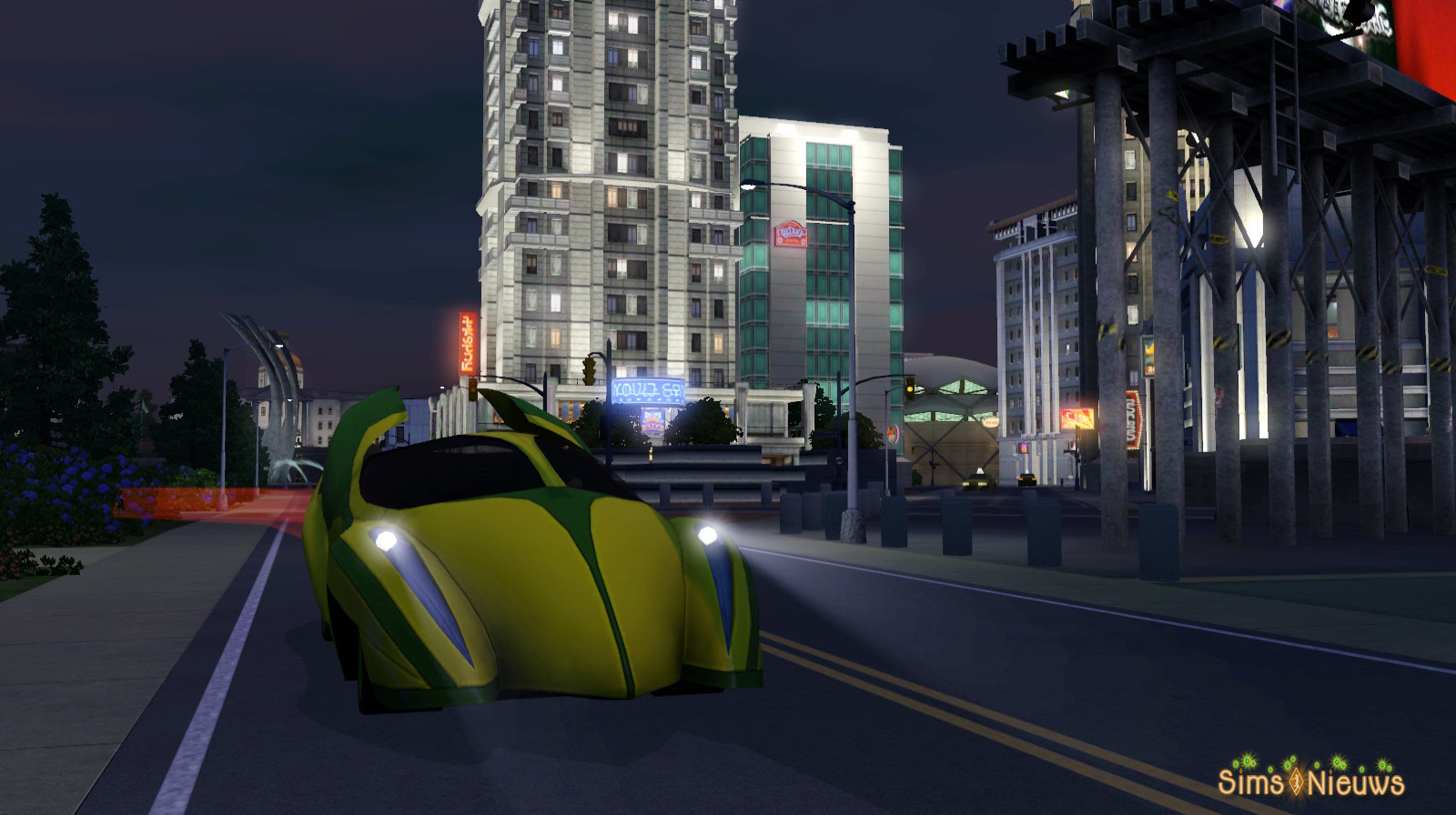 The superhero theme is the last theme Movie Stuff has to offer. This theme has been inspired by heroes like Superman and Batman. This theme even has a kind of BatMobile: a SimMobile. For the villains there is the Vigilante Supercycle. Also thirteen other items have been added. 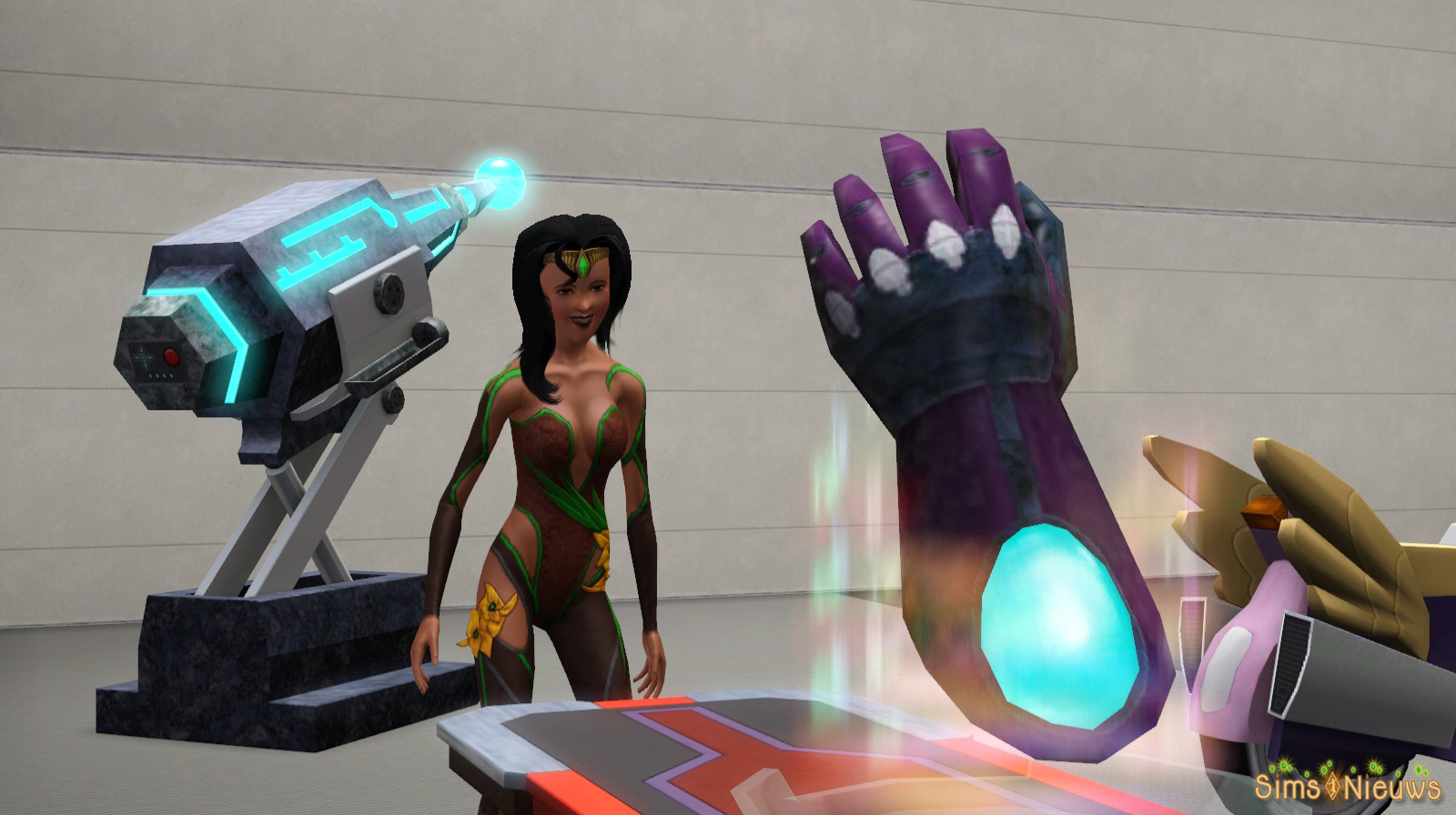 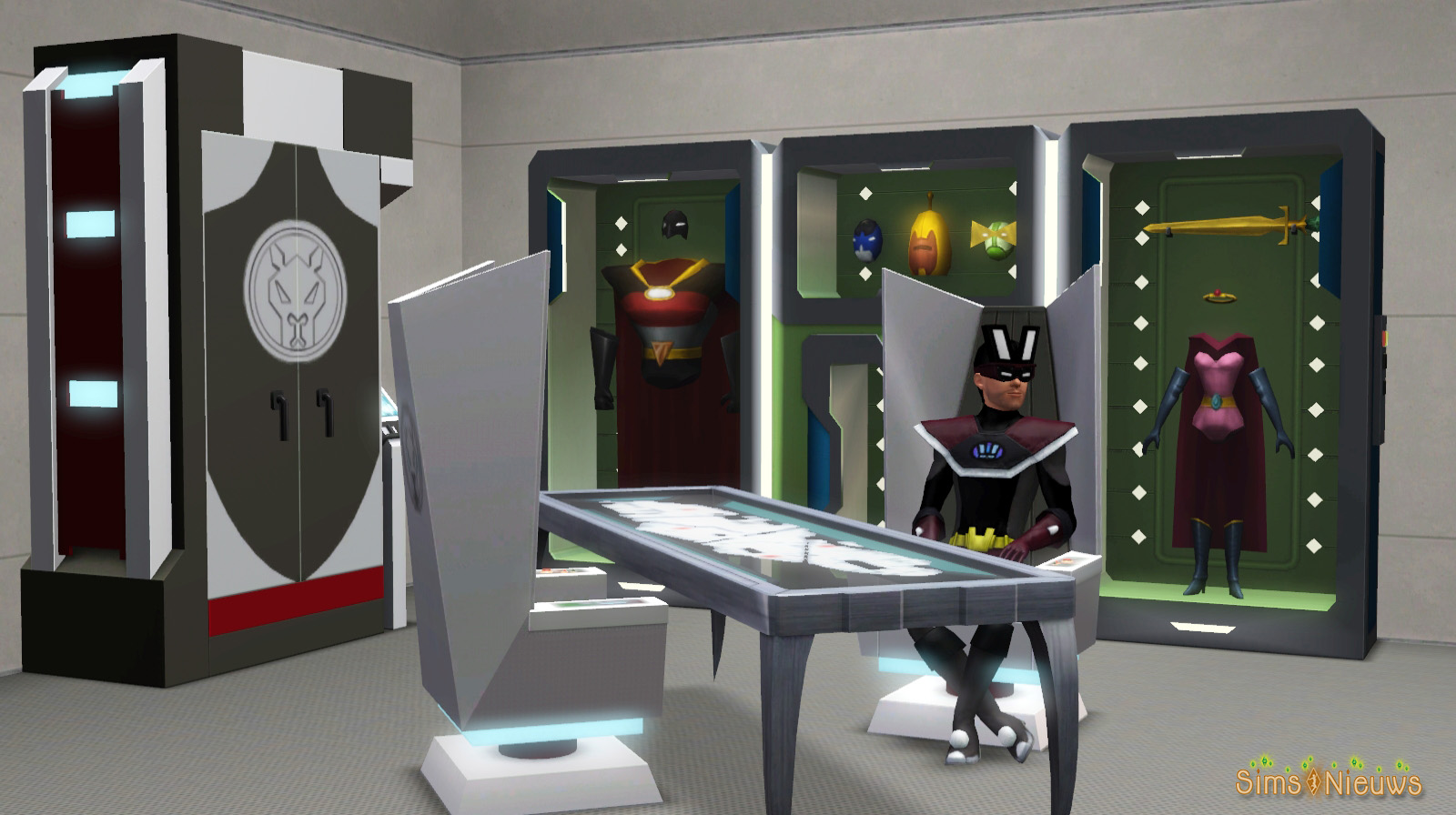 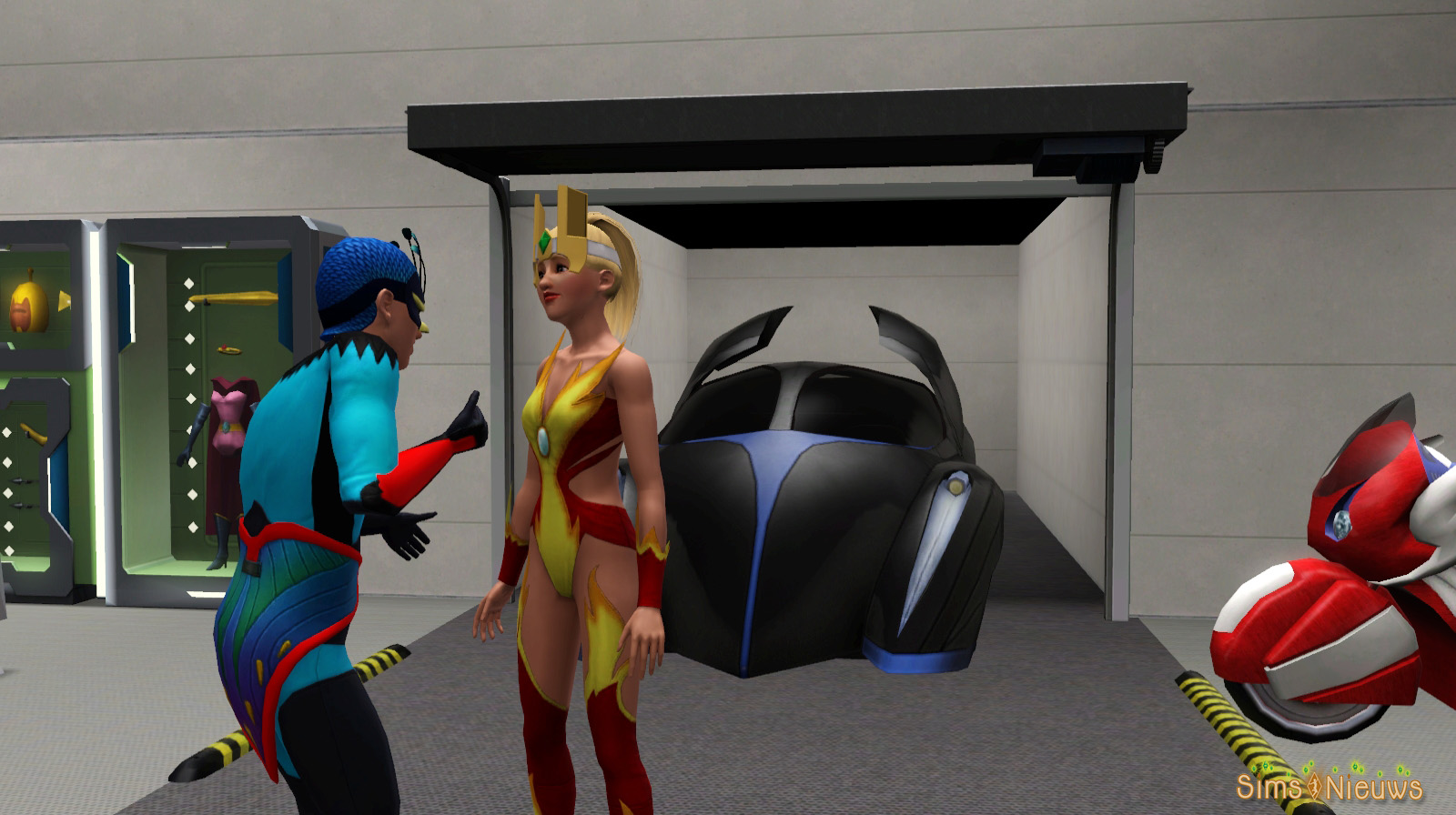 Nice items in the superhero theme are the Super Ray, the Super tight dress up chest and the Maxis’ Metal Hand. Further there is a table with map of the town on it and a sideboard/cabinet. Several decoration items like the My First Vanity Wall complete this theme.

Other features in Movie Stuff

Besides the above mentioned themes there are another couple of things that Movie Stuff brings. First of all the loading screen had been altered. This is not at all unusual. The loading screen is – obviously – overflown with movie rolls. Secondly, there are two new radio stations. The three new channels are Creepy, Legendry and Wild West.

The themes western, horror and superheroes are a nice idea of The Sims-team, but the pack doesn’t feel complete. The best theme is superheroes, because this is the most refreshing. The other two might just as well have been an addition to The Sims Pets and Supernatural. Every theme only counts ten objects. These objects are nicely made, but not suitable for a ‘normally’ decorated home. Besides that a complete house, decorated in one theme, isn’t possible. Compared to the other stuff packs this pack has just as many items. A comparison to the Store can’t stay behind, because 81 items for about €17,99 is relatively well priced. The question is whether these 81 items really add something to the game. Unfortunately, according to the Simsnieuws team, it doesn’t. Practically every stuff pack gets the same evaluation. Fortunately this is the last evaluation we can give to any stuff pack, for Movie Stuff is the last pack for The Sims 3.

On the forum members were askedif they would buy the Sims 3 Movie stuff, and if, which theme appealed to them the most. 47% of the members showed they would buy the pack. 20% will wait and see first and hasn’t decided if he will go and get the pack. Reasons for not buying Movie Stuff have to do with the price, the topic and the value it will add.

Out of the percentage that does have the game, 67% likes the horror theme the most. The westerntheme takes the second place and so the last place is for the superhero theme.

Simsfan1988:
I like the stuff pack: nice themes. To bad it’s a little expensive! At least now my collection is complete again!

Bas: I will not buy it for the time being. It does seem like a nice pack with a lot of fun stuff!  Ofcourse I’ll buy it in the future to compete my collection, but lately I don’t really play The Sims anymore. That probably has to do with all the bugs I have; that doesn’t do much for my gaming experience, and therefore my motivation for playing.

Minermb: No, because I almost never buy stuff packs!

AnsjJ2:From the moment is was announced, The Sims 3 Movie Stuff hasn’t really appealed to me all that much. After the release I wanted to give it a chance, so I bought the stuff pack. Unfortunately, my opinion still stands and this stuff pack doesn’t appeal to me. To bad that this is the last stuff pack of the series. In my opinion, EA should rather have thought of an IKEA or H&M pack.

Fransor: I think The Sims 3 Film Stuff Pack is a nice pack for the game. I kind of like these weird things. Still I miss a lot of things and some of the items I really do not need. I also miss the flirtations towards iconic films. That really disapoints me. However, everything has a nice finish and finally you can be a superhero!

Ray: I don’t really like The Sims 3 Film stuff pack, because it is some sort of expansion for The Sims 3 After Dark. And to be frank, they could have put the items in After Dark or Showtime. Some of the outfits are nice, but the rest is not really special.

Stefanovic: This stuff pack is absolutely not a musthave. In general I don’t think the stuff packs are extraordinairy, and this pack doesn’t change my opinion. I just want to make sure my collection is complete. The stuff packs are expensive and not complete in my eyes.