A little anecdote (Dutch version of the game):

Xelles, one of our teammembers had created a sim. Of course he wanted to try out the way timetravel works. So without delay he ordered his sim into the machine to make a journey into the past. The image of the timemachine immediately became wavy and shaky, thereby making clear without a doubt that something is happening inside. Once your sim is traveling the stories pop up in the new dialog screens. I won’t be able to repeat this little story word by word, but it went something like this: ‘Your sim finds himself in the middle of rebellion in France. Now he is being trampled by a horde of rebels. The leader of this rebels is just a small guy with a big mouth’.

It was so obvious, this one was about Napoleon. Personally I found it hilarious to depict this little Frenchman. It also shows, that it can be quite worthwhile to read those little stories about the adventures of your sim during his timetravels.

The first person we see is a very concentrated TenerifeTerreur, trying to comprehend all the beauty she sees. Just as Xelles is doing. If you have a better look you will see Superman is a big simsfan as well, by the way: 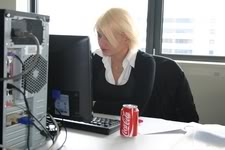 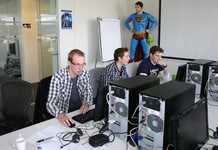 Two other pictures of the participants of this sneakpreview: 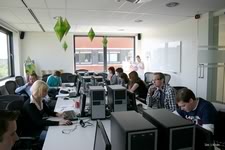 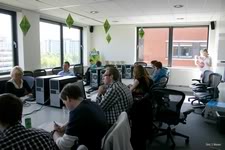 At a sneakpreview you always have those moments you have questions. Here you see Anita – Community Manager of EA Netherlands – answering some of those TenerifeTerreur had: 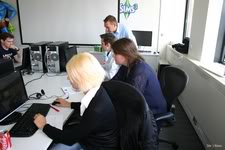 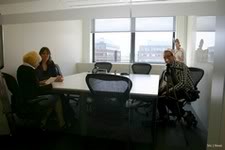 Some people were intensely in their previewing, they almost became sims themselves; spontaneous plumbobs appeared above their heads:

| take me back to the Sims 3 Ambtions Sneak Preview page. |