Anybody Can Be a Hero … or Something Along Those Lines

Perhaps I am speaking for myself only, but I cannot imagine a child who doesn’t want to be a hero when they grow up. We often start at the comic level of capes and super powers, but it isn’t long before we see the common everyday heroes around us – firefighters, emergency doctors, or detectives.

When brainstorming for The Sims 3 Ambitions we had plenty of ideas, but our hearts and minds kept coming back to that fantasy of heroism. 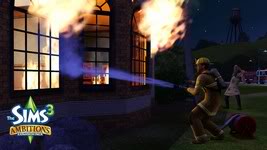 No Blaze Too Big

The Sims 3 Ambitions Expansion PackFirefighting was the first career we settled on for The Sims 3 Ambitions. It was such a huge challenge and natural fit for our neighborhoods that there was little discussion on the “why,” though this didn’t solve the issues of the “how.” Fires have always been more of a nuisance in our games, so it was clear from the start that we wanted them to be big, dangerous, frantic – and fun!

Firefighting is a profession of careful preparation, leading to smart, tactical snap decisions at the scene of the emergency. Firefighters can prepare at the fire station by maintaining their equipment, like the new fire engine vehicle. Athleticism will also greatly aid your firefightersa fit firefighter can do some damage when fighting a blaze! Finally, handiness goes a long way towards gaining the upper hand in a fire. Handy Sims can upgrade the fire engine, fire alarms at the station, and even their personal fire extinguisher.

However, the time for patience and tinkering is gone the second the alarm rings. Conversations end, forks are put down, and it’s on! As your Sim races to the scene of the emergency, it’s important to think about the type of emergency – it can be a small fire, gnome invasion, massive inferno, earthquake, or an experiment gone catastrophically wrong at the science lab. To leave a few surprises, but explain the first step, we’ll start with a small fire.

Small fires are often anything but. In fact, the name small is really only useful when used in relation to the huge fires your Sim will encounter later. When my Sim arrives at the scene I like to pause and take in the surroundings. Where are the fires in the victim’s home and where are the most home furnishings in danger? I like to play as a noble, heroic firefighter so I always try to preserve as many personal belongings as possible. If need be I can smash and destroy my way to cut off a fire’s fuel, but I prefer to think of how the victims will feel the morning after.

Once I have an idea of the situation, I queue up the fires in the order I want them extinguished. While the victims are screaming and panicking outside, my firefighting professional goes from flame to flame to alleviate the situation. Phew, that was easy!

A massive inferno may require my Sim to save trapped Sims, break down doors, put out fires from the outside before I can continue, and continue to fight fires once I DO get inside. It can get a little hairy, but honestly, that’s just a part of my firefighter’s job. 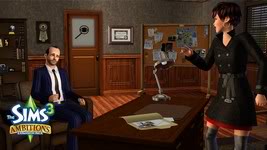 The Sims 3 Ambitions Expansion PackGrant McSolver is a private investigator that has been hired by countless Sims around town. He knows his way around a case and knows how to get the answers he needs. Unfortunately for the town, there are few things beneath McSolver.

There was the time McSolver was hired to dig up some information so the client could blackmail a rival. While doing the digging (literally, in a trash can), McSolver decided to collect early and do a little blackmail of his own.

On another case, McSolver needed to gain permission from a suspect to dust around the house and snoop for clues. This could have been handled in a civil manner, but McSolver isn’t patient or civil. Instead, he busted out his trusty lock pick kit, broke into the home, obtained the prints, and “borrowed” a television. For evidence, of course.

Stolen cars, missing art, heists conducted by mad scientists, endless stakeouts – all in a day’s work for a private investigator. With a rumpled trench coat and slick hat, your Sims can look the part and be as skeevy, or noble, as you see fit. Few careers have as much unexpected moments or open-ended gameplay as the investigator.

Grant McSolver may be a no-good scumbag who tends to be on the side of the law, but that doesn’t mean that needs to be true for your investigator. 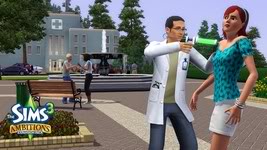 The Doctor … is out?

The Sims 3 Ambitions Expansion Pack As with every profession in The Sims 3 Ambitions, we wanted the jobs, experiences, and gameplay moments to be in the neighborhood and outside of the buildings. We really liked the medical career from The Sims 3 but wanted to enhance what was already a solid foundation.

Doctors may now encounter medical emergencies, both common and otherwise, while out and about. Finally, the story that begins with “is there a doctor in the house?” can be told. For example, you might be at the bistro having a romantic meal with a love interest. Suddenly, there’s a commotion and panic – another patron is choking! Your Sim rushes over, runs the diagnosis, and hopefully makes the right call. Not bad for a first date!

Doctors aren’t just about emergencies. Preventative medicine is just as important, which means free health clinics must be set up and inoculations provided. The community’s well-being may very well hinge on your Sim’s performance as a top tier medical professional.

As with the other careers, doctors don’t always need to adhere so strictly to the “right” way of doing things. Companies may provide your Sim with experimental medicines, which can then be sampled by patients. Nothing too bad should happen, plus your Sim will receive a small kick back from the company. Everybody wins, right?

Whether you decide to tell the story of a local hero or manipulative quack is entirely in your hands. The game itself provides some deep, emergent experiences that require you to think quickly and give your Sims the right direction before the worst occurs. Do you think you’re up to the task? More importantly, are your Sims?