I was always a fan of steampunk – even before I knew what steampunk was. I was more or less raised on fantasy and science fiction. In our house was a copy of The Encyclopedia of Science Fiction, a massive book that included time lines,major authors, novels, pulp fiction, TV series and films, etc. I was from here that I noticed that the natural progression of science fiction seemed to start with steampunk and the time it seems wedded to — the Victorian era. As a big fan and viewer of various adaptations of Sherlock Holmes, especially the UK ones, which were set in actual Victorian areas and showed off the era’s buildings and fashions, that’s also one of my favorite eras. Combine my two great loves and you get steam-based technology with some early electricity along with the clothes and mannerisms of the Victorian era added; and I think you understand why steampunk appeals to me.

My first hints of truly discovering and understanding steampunk were glimpses from some of my favorite movies. They included apocalyptic and dystopian worlds depending where people would hold onto scraps of the pre-apocalypse world. I also enjoyed cyberpunk tales such as Bladerunner.It was dark and different and definitely not for everyone. Then it narrowed abit when I discovered fantasy films like Hayao Miyazaki’s Howl’s Moving Castle,Nausicaä of the Valley of the Wind,Castle in the Sky and Spirited Away. It was when I discovered the steampunk subculture that I found the only way you can have a multi-era, multi-cultureand multi-tech world and have it work! This subculture finally made sense to me and I knew what it was! 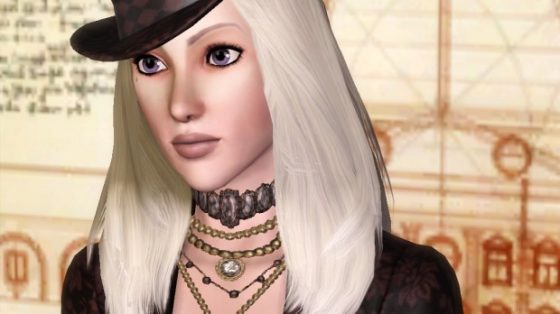 Sim: Sen Clockwork, This Sim is what I think an Alice and Mad Hatterhybrid would be. Top hats, pocket watches, mixed patterns, artistic and eccentric,with a bit of show time magician-eque feel.

In steampunk you can have a hand-stitched fantasy without feeling like you’re trapped in a western-suburban modern-normal world. You have enough luxuries like indoor plumbing and some electricity while still being distant enough from the modern world to add an air of the exotic and adventurous.Steampunk is where the high end of a world could be aristocratic, Art Nouveau and/or Rococo, and the same world could have slums where you have unpolished woods or cozy peasant homes or gypsy hovels with mismatched treasures and colors. Right in the middle are middle and working class Victorian-esque, eccentric, DaVinici like apprentices (inventors, artists, writers, musicians and sculptors – all skills available in The Sims 3) and a steam powered – Tesla enthusiast core.And you can turn it up or down on how eccentric like it.

I’ve been playing with The Sims 3 for less than a year, but I have been with The Sims franchise since the beginning. It was when I saw the Supernatural poster, that was it. I knew I was going to invest in The Sims 3. Supernatural had so many Victorian-styled items that I was hooked. By the holidays I bought up almost every EP/SP and have pre-ordered everything since. Then I started investing in The Sims 3 store worlds. That’s where I was sold on the Store. Sure I had a few sets with the free Sim points from registering, but this was serious collector mode now. 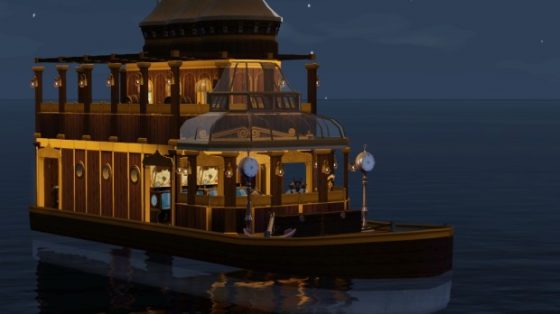 Houseboat: The Golden Compass, this is my first houseboat and I hadn’t done a Steampunk build for a while. I liked using the World Adventures barrels,baskets and nectar racks. I even did a makeshift golden compass on the bridge of the ship.

I did want to mention to the Store team’s growth and evolution; I am stunned and amazed bi-monthly, and am more excited about store worlds with the upcoming Midnight Hollow than the EPs! That’s not to say I’m not going ga-ga for Into the Future. The new tech, time traveling, and Plumbot-making couldn’t go any better with inventors and steampunk fans! Just know I am re-coloring allthat silver and white to coppers, golds, and corroded metals. Sorry, I just had to do the fan-girling thing!

Another thing I discovered at the same time as The Sims Store was the Exchange and the builders in Creative Corner. I was already fully locked in to my Victorian and some whimsical but I did not fully lock into Steampunk until I saw Larifari2009’s re-colors and builds! My first steampunk build was inspired by Larifari2009’s re-colors and steampunk multiculturalism. I also found inspiration in Luckyheather’s steampunk builds. Later on Murfeel, who probably  beats me on steampunk love, opened my eyes to Art Nouveau which gave me a step up for giving a more European feel to my steampunk builds. I was so happy with my first steampunk build, I’d stare at iton the Exchange; as silly as that sounds. Much to my surprise, hours later I saw a star, and it was featured! Well that was it; the building couldn’t stop after that. 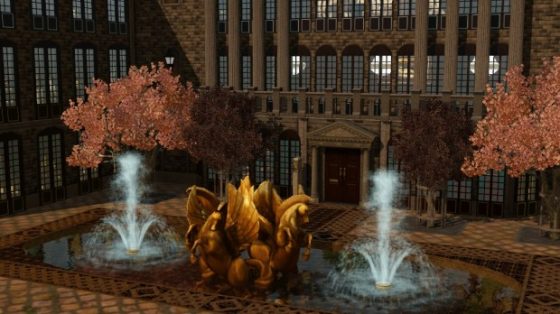 Clockwork Manor, this is my first legacy house and it is based on the Victorian manor with Asian and world travel influence. This build is a Gaslamp fantasy meets Steampunk.

Over the years, steampunk has expanded into subgenres such as steampunk-whimsical and steampunk-Victorian. Whimsical tends to be a more fun and fancy-free approach with inspirations from Final Fantasy to Wonderland.Steampunk-Victorian is a lighter version of Steampunk or even Gaslamp Fantasyfor the more conservative, more era-architectural inspired. All this diversity gives great flexibility for building and for being placed in other worlds or themes.

I think the infectious thing about Steampunk is how you can Steampunk almostanything (and where Steampunk fails usually Cyberpunk picks up). Do not disregard any items that you haven’t re-colored/re-patterned first, the in-game defaults can be very misleading. If you’re ever not sure how to make something more Steampunk here are techniques that I use that usually are fail safe.

1. Re-coloring to: Medium, rich to dark woods; coppers, golds and corroded metals; and desaturating colors to look more worn out.

4. Steampunk is very forgiving. You can use almost any build style and recolor or just add Victorian, eccentric, industrial or whimsical features.