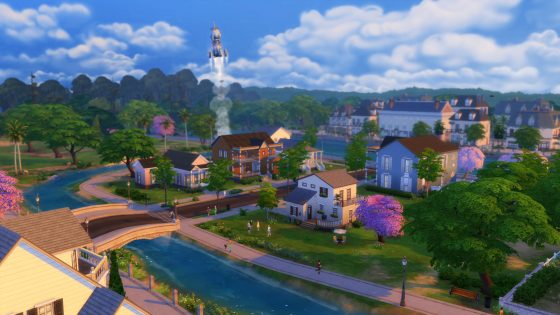 Simplification is a key word for Sims 4, letting you create and play with less fuss. But that doesn’t mean that the game is dumbed down any – it’s just streamlined and smarter.

Previously EA talked about how the Sims 4 makes they physical side of character creation easier with better tools, no sliders, and more choices. After that, picking an aspiration sets up a long-term personality goal for your sim (these are based off of archetypes like nature, food, athletic, etc), and each aspiration comes with an appropriately paired trait (such as the Computer Whiz aspiration that’s paired with the Quick Learner trait). Your aspiration can be changed at any time, but if you complete the aspiration’s goal you’ll be rewarded.

Selecting a handful of traits (hobbies, lifestyle, social, emotions) fills out your sim’s personality, and these interplay with your sim’s emotions to influence what you can do in the world. For instance, the emotional state of an angry sim can be mitigated by utilizing one of your traits. If one of your traits is that you like to hang out with friends, then doing so can lighten your mood. Your emotional state dictates your options when socializing or interfacing with the world. Developer Maxis says that it doesn’t want sims’ emotions to be too schizophrenic, so it bares watching how the game balances this powerful feature.

Another new tool to enhance your sim’s personality is mentorship. This allows a sim with a higher skill level to boost the skill level of a lower sim faster. For example, you could learn to play piano quicker with a mentor.

Ease of use also extends to building your home in the world. The game’s Integrated Gallery takes the Exchange and moves it into Sims 4. You no longer have to go to an outside browser when you want to upload a new mansion or piece of furniture. You can also share themed rooms and move around them around complete with all their objects. Speaking of moving things, in Sims 4 you can now move your sim over to a new world without having to start everything over.

Sims 4 comes out for the PC this fall.