You have already been able to read my personal and The Sims 4 report of Gamescom and AnsjJ2´s personal report of the playsession of The Sims 3 Into the Future came online a little while ago. Now it´s time to look at the content of the game in detail. The Sims 3 Into the Future is such a big pack that we cannot address everything in this preview but chose to delve into three subjects: A first impression of the future, your effect on the future and Plumbots.

First impression of the future

When you travel to the future for the first time, ofcourse you are very curious about what’s waiting for you. The first thing that comes to attention is that you not only go to the future, but directly to another place. It doesn’t matter where you start, you’ll end up in Oasis Landing no matter what. It’s understandable that The Sims Studio chose this method, because it will cost a lot of time to make an alternative future for every single world. Still, this is too bad. Also it comes to attention that the architecture in the future looks calm. Only the standard rabbit holes are big and imposing. But the future is mainly visible in the little details and inside Sims’ homes. The kitchen of the future is based on saving time, cause who had time for cooking? With one simple push on a button you can prepare and eat everything because synthetic food is ready in the blink of an eye. But also outside of the house al lot of things changed like the means of transportation. Everything you’d hoped to be there in the future is there: A jetsuit, hoverboard, hoverbikes, hovercars and even a hovermonorail.

Your effect on the future

Fortunately future doesn’t just takes you over, you really have influence on the future and how it looks. On a small scale this means for Oasis Landing that you can earn statues because you did something good. These statues are called Inheritance statues and you can earn five of them: The Renowned Philanthropist, The Pioneer of Plumbotics, The Lustrous Entertainer, The Time Keeper and The Trendsetter. Of course you have to make an effort for this immortalization, but luckily this is all shown in the ‘Timealmanak’, a book containing everything you need to know about the future and how to achieve certain things.

Besides that you can earn certain statues, it’s in your hand whether the future will become good, a utopia, or bad, a dystopia. If you don’t make an effort you will get the default future but who doesn’t want to work on the future? To get a bad future you have to make sure your Sims don’t care about the future in the present and live their lives as if there is no tomorrow. But when you want to create a good future all Sims have to be happy and want nothing but a beautiful world. Oasis Landing therefore looks different every time you’ve triggered one of the futures. In a bad future everything looks darker and Sims are grumpier and look bad but in a good future Sims even walk happily and the town looks beautiful.

The Sims 3 Ambitions already came with Simbots and now with Into the Future we get Plumbots. The big difference between these two types of bots is that the Plumbots have a chip system with which you can adjust their personality, needs and the things they do. You can buy these Plumbots but also make them yourself. To make a Plumbot ofcourse you need the skills, so it will take more time. A special divice lets you alter your Plumbot. There is a special Create a Plumbot menu that looks suspiciously like Create a Sim.


But you can do more with these Bots than only put them together. One Plumbot is not the other because Plumbots have a so called chip with which you can determine their personality. But you don’t get these chips for nothing. First you have to find of make Nanites, little mechanical insects. These Nanites are part of the different chips you can make. But this goes with a detour, after that you have to discover the chip. Only then you can make them. The nice thing about these chips is that they don’t stand alone. Some chips will make each other stronger.
A Plumbot is playable from the beginning, a nice new rabbit hole is the PlumBot Stadium where you’re PlumBots can enter matches and win prices. This basically is the same as the horseracing of The Sims 3 Pets. 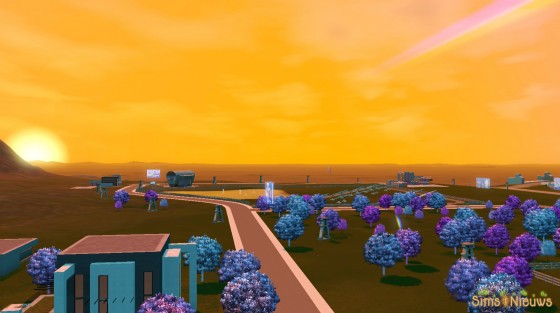 Ofcourse I want to thank EA very much for the fact that I, FranSor, and AnsjJ2, were invited to the office to take a look at The Sims 3 Into the Future and the fun we had.